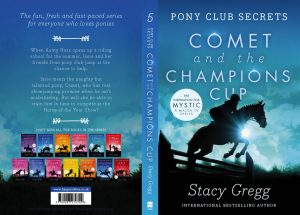 Take Natasha Tucker for instance. You would think, after all Issie and Natasha been through together as stunt riders on the set of The Palomino Princess, that Natasha would have finally wanted to be friends.

But no. From the moment the girls had arrived back at pony club this season, Natasha had become her same old super-snobby self. In fact, she was worse than ever.

Issie had been really upset at first when Natasha had stopped speaking to her. Now she just tried to avoid her – which wasn’t always easy. Aidan’s call had been urgent. Issie needed to talk to Stella and Kate as soon as possible – and shew knew exactly where they would be, since today was rally day. She would find them at the pony club.

“They must be here somewhere,” Issie said staring out the window as her mum manouevred her car through the pony club gates and into the parking area. Issie was so busy looking for her two best friends that she hardly noticed where her mum was driving until it was too late.

“No mum! Not here!” Issie shrieked, as Mrs Brown pulled to a stop right next to the Tucker’s flashy blue and silver horse truck.

“I thought you and Natasha were friends now?” Mrs Brown said.

“So did I,” Issie sighed, “but it turns out that Natasha doesn’t think so.”

Issie didn’t know why Stuck-up Tucker was so dark on her, although Stella insisted that it was because Natasha was jealous.

“You and Dan!” Stella said. “She has got like, a huge crush on him and you’re always hanging out with him, which makes her blood boil.”

It was true, Issie and Dan were pretty tight – but big deal! Stella and Kate and Ben were her friends too! Dan was most definitely not her boyfriend. Still, if Natasha wanted to be jealous of Issie’s non-boyfriend then she guessed there wasn’t much she could do about it – except stay out of Natasha’s way.

“Mum? Do we have to park here? Can’t we move?” Issie pleaded again. But it was too late because at that moment, a blonde girl with hair braided into ramrod-straight plaits emerged around the corner of the blue and white horse truck. She was leading an elegant rose-grey gelding.

“What are you doing here?” she said flatly, “It’s a rally day and you don’t have a horse to ride, do you?”

“Ummm…I’m looking for Stella and Kate,” Issie faltered, “Have you seen them?”

“Why?” Natasha said, “Why are you looking for them?”

Natasha’s frosty stare made Issie start to babble and before she knew it she was telling Natasha all about Aidan’s phone call.

As soon as she started though, she immediately wished she had kept her mouth shut. Natasha had a face like thunder. Even though she would never admit it, it was obvious that in some weird way she was upset that Issie wasn’t asking her to join them this time. Issie sighed. If she had actually asked Natasha she would certainly have said no. Now, because she hadn’t asked her Natasha was in a total huff. You just couldn’t win.

“So Aidan is looking for some pony-mad slaves to rope in to do all your aunt’s dog work yet again,” Natasha harrumphed, “I hope you’re not thinking of asking me this time because I’ve already done dung duty for her once and I’m not planning on falling for that again.”

“It’s not like you were her slave! Aunty Hess paid us to work on The Palomino Princess!” Issie said indignantly.

“What-ever!” Natasha said, “Anyway, I’d rather be riding my own horse than trying to teach some snot-nose brat how to keep their hands steady. You probably won’t even get a chance to ride. You’ll be too busy mucking out the stalls and grooming all their ponies for them.”

Natasha smirked at this put-down, then made a vague gestured across the club grounds to the far paddock, “Anyway, if you’re looking for Stella and Kate, I think I saw them over by the main arena.”

And with that, she turned her back on Issie and began to busy herself with attaching Faberge’s bell boots.

Issie didn’t care what Stuck-up Tucker said. Maybe the riding school would be a lot of hard work and not much actual riding. But it would still be fun just being near the horses, helping to groom them and look after them.

She just hoped that Stella and Kate would both feel the same way. Aidan needed all three of them.

Issie found Stella and Kate with their horses, under the shade of the plane trees by the main arena. The girls had finished riding for the morning and were watching the other riders in the showjumping arena.

Stella was lying on the grass next to Coco, her little chocolate brown mare. She had taken off her riding helmet and her wild red curls were sticking out at funny angles with a flat patch on the top of her head where the helmet had been. Kate was standing next to her holding the reins of her rangy bay thoroughbred. She was taller than the other two girls, even though they were all in the same form at Chevalier Point High School. Kate still had her helmet on and she wore her blonde bobbed hair tucked up neatly out of the way in a hair net – which was actually a rule for club days although Stella clearly hadn’t bothered. Stella wasn’t very big on rules – Issie noticed that she wasn’t even wearing her club tie underneath her navy vest.

“Issie! Ohmygod. What are you doing here?” Stella shrieked when she saw her best friend.

She shrieked even louder when Issie told her about Aunt Hester’s riding school.

“Uh-huh,” Issie said, “The kids are advanced learners so we’ll be teaching them the basics. Plus, we’ll have to help Hester to run the camp, doing all the other stuff like cooking meals and grooming the horses. She can’t afford to pay us. But we get room and board. Plus you get to bring Toby and Coco with you and we can hack out across the farm after we finish schooling each day.”

Stella grinned, “Cool. If I can bring Coco then I’m totally there!”

Issie knew it would be easy to convince Stella – she was mad keen on anything horsy. But sensible, practical Kate was a different story.

“Why is Hester running a riding school – I thought she trained movie horses?” Kate said.

“Ummm…the movie business is having a few hiccups,” Issie said. “Anyway, it’s not just a riding school – it’s like a camp for horsy kids like us. The riders come and stay at Blackthorn Farm for three weeks over the school holidays and learn to ride…” she looked at Kate’s hesitant expression, “Come on! It will be really good fun…”

“We need to spend the week getting the camp ready before the kids arrive. Aidan is coming to pick us up with the horse truck on Tuesday.”

“That’s only two days!” Kate boggled, “Issie, I don’t know if I can. Mum will wig out if I tell her I’m going away for a whole month!”

Issie had been desperately worried that Kate would say no. Of course she would be put off by the idea of suddenly getting on a horse truck and going all the way to Gisborne for a month. The problem was, she couldn’t imagine going without Kate. Cool, calm Kate was a really good riding instructor – she was brilliant with kids and had loads of patience. All the junior riders at Chevalier Point totally adored her and Kate was always Avery’s first choice to fill in and teach the younger kids if an instructor failed to turn up for a rally day.

Kate looked thoughtful. “Issie, do you think you could get your mum to ask my mum? If your mum has okayed it, she’d have to say yes. Besides, I’ve stayed at Hester’s before and she let me go that time didn’t she…” Kate was smiling now, “And if I can take Toby with me, how excellent would that be?”

Issie squealed and threw her arms around Kate. “I knew you’d say yes! Oh this is going to be so cool!”

The only thing left to organise now was Storm. Issie would miss him so much, but she was sure that Avery would take good care of the colt and Blaze while she was away. Avery had looked after Blaze when she was in foal and Issie was away working on The Palomino Princess. She knew that Avery would be more than happy to take care of Storm and Blaze this time while she was gone.

“Issie, you know that normally I would do it,” Avery continued, “The problem is, I was planning to go to Gisborne myself in a week. It’s the Horse of the Year show. I’m taking Dan and Ben down to prepare their horses to compete in the showjumping. This is first time Dan will have a chance to compete on his new horse. We’ve been planning it for ages.”

Of course! How could Issie have forgotten? The Horse of the Year was the biggest event on the equestrian calendar.

Avery looked concerned, “I’m sorry Issie. I can look after Storm and Blaze for the first week, but then we’re trucking Madonna and Max to Gisborne to start training there and I’m afraid that leaves you stuck – unless you figure out a solution.”

Issie was devastated. This completely ruined their plans. She couldn’t leave Storm behind with no-one to check on him and care for him each day. And she couldn’t take the colt with her. There was no way he was old enough to travel all the way to Blackthorn Farm. The trip to Gisborne took most of the day in the horse truck, much too far for a three month old colt. There was only one solution, Issie decided. She couldn’t go.

“Don’t be ridiculous!” Mrs Brown said when Issie met her back at the car and broke the bad news.

“Oh for goodness sake Isadora,” Mrs Brown said, “OK, I think we’re all aware that I’m not exactly Pippa Funnell, but it’s not like you’re asking me to ride at Badminton is it? I’ve been around them for long enough now and I think it’s perfectly within my capabilities to go and check on your colt each day. I’ll make sure he’s got food and water and hasn’t got himself tangled in the electric fence!”

“Absolutely,” Mrs Brown smiled, “Storm will be just fine, I promise you.”

Aunt Hester was thrilled that evening when Issie phoned her with the good news. “Aidan’s quite convinced that this riding school plan will save our bacon – and I certainly hope he’s right,” Hester said. “Is your mum OK about you coming here for the holidays? I haven’t ruined any family plans have I?”

“Mum’s been great!” Issie said, “And she talked to Mrs Knight and convinced her to let Kate come. She’s even looking after Blaze and Storm while I’m away.

“Well, well,” Hester said, “It might not be too late for that sister of mine to turn horsy after all.”

“By this time tomorrow we’ll be at Blackthorn Farm.”