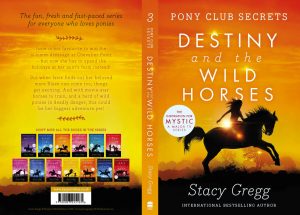 Avery slapped his riding crop against his long brown leather boots to get their attention. “With the dressage test approaching this weekend, I think you’re all ready for some more advanced schooling,” he said. “Does anyone here know how to do a flying change?”

Without hesitation a hand shot up amongst the riders.

“Ah, Natasha. Of course. Please come forward for a moment,” Avery said. Natasha cast a glance at Issie as she rode Faberge past her to stand at the front of the ride.

“Now Natasha here is going to demonstrate a flying change,” Avery said. As you all know, a flying change is when we ask our horse to canter with a leading leg, and then we ask with our aids and make the horse change legs in midair.” Avery paused. “You might have seen this on your Olympic dressage videos at home. It looks a bit like the horse is skipping, doesn’t it?”

“Anky makes it look really easy when she does it on Bonfire,” Stella said.

“Well then, let’s see how easy it really is, shall we?” Avery said. “Natasha, why don’t you work your horse around the arena at a canter and then ride a flying change through the middle of the school to show us how it’s done?”

Natasha set off on Faberge with a look of grim determination on her face. She cantered the rose-grey around the arena and then turned him down the centre of the school to begin her flying change. In the middle of the school Natasha gave Faberge a big kick with her heels. Nothing happened. She looked exasperated. Poor Faberge looked confused.

“Try again, this time with nice, clear aids. You don’t need to kick your horse! Just put that right leg forward on the girth,” Avery instructed. Natasha rode around and down the centre line again. This time, though, she ignored Avery’s advice and gave Faberge an almighty boot with her right leg. Faberge shot up like a rocket, putting in a vigorous buck. Natasha gave a yelp of horror as she flew over Faberge’s head and sailed through the air, coming down in a heap on the sandy surface of the arena. Faberge gave a terrified snort and cantered off. Dan and Ben quickly clucked their horses and rode after him while Natasha stood up grumpily and dusted herself down.

“Are you all right?” Avery asked her. Natasha, who was bright red in the face, nodded quietly.

“He’s a very sensitive horse. If I were you I’d master the basics on him before you try a flying change again,” Avery said kindly. Then he gestured to Issie. “Isadora, why don’t you give it a try on Blaze? Remember, you need to move your right leg to the girth.”

“Good girl, c’mon,” Issie clucked to Blaze as she set off around the perimeter of the arena. As she rode down the centre line in a canter she sat tall in the saddle and tried to think about arranging her legs into the correct position. Right in the middle of the arena Issie did exactly as Avery had instructed – she moved one leg forward and the other leg back and squeezed hard. Beneath her she felt Blaze rise up and throw out her front legs like a schoolgirl skipping down the street – a flying change!”

“Textbook stuff! A very nicely executed flying change.” Avery was pleased. “Excellent. Now, who’s going to give it a go next? Dan? How about you?”

Issie slowed Blaze down to a walk and gave her a big slappy pat on the neck as she took her place back in the line. “Not bad for a circus pony!” she whispered to her pony.

In the end, Issie was the only rider that day to master the flying change. “It’s not as easy as it looks,” Stella had grumbled as they untacked the ponies. Issie had nodded in agreement with her friend, but the truth was that to her it had been easy. It was as if she only had to think about what she wanted to do and Blaze would respond. OK, so there weren’t any fancy flying changes in their dressage test this weekend. Still, Issie felt certain for the first time ever that she and Blaze stood a really good chance. They might even win.

“Mum! I’m home! I did a flying change today!” Issie charged in through the front door without pausing to take off her riding boots.

“Isadora! You’d better not still have your muddy boots on!” her mother yelled back from the kitchen.

Issie stopped dead and ran back to the laundry, stripping off her boots and socks before running back to the kitchen to find her mother.

“You can tell me all about it while you eat your dinner,” Mrs Brown said. And so, between mouthfuls of potato salad, Issie told her mum about Natasha and the flying changes and the dressage series that was starting on Saturday.

“Blaze is going so perfectly. This is going to be the best summer I’ve ever had!” Issie said.

Mrs Brown didn’t say anything. She just looked down at her plate and gave her quiche a distracted poke with her fork.

“Mum? What’s wrong? You’ve hardly said anything since I got home,” Issie said.

Mrs Brown pushed her plate aside. She looked serious, but still she didn’t speak.

“Issie, I am afraid I’ve got some, well, it’s not bad news really. I mean it’s good but it’s not good…” Mrs Brown hesitated. “I’ve been invited away on a conference for work. They’re going to fly me there and pay for accommodation – the whole thing. I’ll be gone for two weeks.”

“We leave on Friday,” Mrs Brown said. “That’s why I wanted to talk to you tonight about the holidays. I’ve made plans for you.”

“What do you mean?” Issie said.

“Sweetie, I can’t leave you here by yourself. If I’m away for two weeks then who would look after you? You’re only thirteen. You’re not old enough to be by yourself.”

“Cool. I can go stay with Stella!” Issie said.

Mrs Brown shook her head. “There’s something else, Issie. I got a phone call last night from your Aunt Hester. It turns out she’s had a bad fall off one of her silly horses and broken her leg.”

“She’s fine,” Mrs Brown sighed, “but she can’t possibly look after that farm of hers. She has Aidan to help her but it’s not enough…” Mrs Brown paused “…and so I suggested that you could go and stay with her until she gets better again.”

“Sweetie – it’s perfect! You can stay with Hester while I’m away, and she needs your help so it suits her,” Mrs Brown explained. “Besides, you’ve never been to the farm before and I know you will just love it. Hester has loads of ponies and all those other animals that she trains. You’ll adore it there.”

“But, Mum! Blaze and I have been working so hard for the dressage competition,” Issie said.

“I know, honey. But I can’t see any other way.” Mrs Brown sighed. “I’ve already asked Aidan if he can drive through to get you. He’s going to be here on Wednesday morning.”