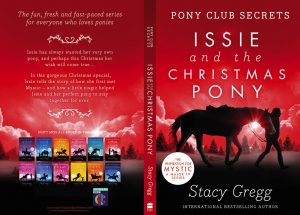 Issie Brown was just a little girl when she realised that Christmas was all wrong. Not wrong exactly, but sort of mixed up, muddled. Not the way it should be.

Christmas on TV was always cold and wintry. There were sleigh bells and snow and you crowded round a roaring fire with hot chocolate while your mum cooked roast dinner with turkey and plum pudding. You’d wrap up warm in coats and mittens to sing carols and then tuck yourself up indoors and watch the snowflakes patter against the window while you waited for Santa to arrive.

Issie couldn’t make head nor tail of it. Because Christmas wasn’t like that at all in Chevalier Point. It wasn’t snowing for starters – in fact, it waspositively baking hot, the middle of summer, without a cloud in the bright blue sky. And there wasn’t any turkey or plum pudding. Issie couldn’t remember ever eating that sort of food for Christmas. For as long as she could remember her family had cooked their Christmas lunch on the barbecue down at the beach. They would wake up on Christmas morning and open their presents, which nearly always included a beach toy like swingball or a boogie board. Then they’d race down to the beach, where Issie would meet up with Stella and Kate.

While their dads put crayfish and scallops on the hotplate to sizzle and their mums set out the picnic blankets, the girls would swim in the sea, riding the waves in on their boogie boards. When lunch was ready, they’d sit down on the blankets, still wearing their swimming costumes, letting the hot sun dry their backs as they ate. Their plates would be piled with bright red crayfish claws, which they would smash open with nutcrackers, prising out the juicy white flesh, dipping it in hot melted butter and mopping up the juice with crusty bread.

For dessert there would be pavlova and strawberries and ice cream, and afterwards Issie, Stella and Kate would lie back on the grass in the hot summer sun until their mums were convinced their food had been digested and it was safe to swim again. No roaring fire, no snowflakes. It was a very different Christmas. A New Zealand Christmas.

It was hard to believe that when it was summer here in Chevalier Point, on the other side of the world it was winter. Right now, it was midnight in Europe and all the kids were fast asleep. Here, it was midday on Christmas Eve. The weather, as usual, was gloriously sunny, and Issie was in the kitchen at her house with Stella and Kate. The girls had come up with the genius idea of making Christmas cakes – with their own very special recipe.

“I need more oats!” Stella was using a wooden spoon to stir the mixture in the mixing bowl. It was already so thick that the spoon actually stood straight up in the bowl even when she wasn’t holding it.

“Here!” came a voice from underneath the bench. Kate, who had been rummaging around below the sink, popped her head up and passed the bag of oats to Stella. “I’ve got the apples too,” said Kate. “I’ll start chopping.”

“I’ve found the secret ingredients!” Issie came through the door carrying a bag of something that looked like lawn clippings and a plastic bottle filled with thick black syrup.

“Perfect!” Stella said. “You put it in the bowl while I stir.”

“Hey, I think it still needs more oats,” Kate said, grabbing a handful out of the bag.

“Oops!” She had managed to miss the bowl and drop the oats on the floor. “Kate!” Stella shrieked. “You’re getting it on my shoes!” There were oats all over the floor and alfalfa bits stuck to the walls.

“She’ll what?” The girls turned round to find Mrs Brown standing in the doorway behind them. She did not look best pleased that her kitchen had been turned into a bomb site.

“What on earth is going on in here? What are you girls doing?”

“Yeah, Mrs B,” Stella chimed in. “We were going to tidy up when we finished.”

“Finished what?” asked Mrs Brown. “Isadora? What are you up to?”

“We’re making Christmas cakes!” replied Issie brightly. Mrs Brown looked at the suspicious line-up of ingredients on the bench. “With molasses and chaff?” She wrinkled up her nose. “Issie, why didn’t you ask me to help you girls? I’ve got a great Christmas cake recipe…”

Issie laughed. “No, Mum. Not for us. Christmas cakes for the ponies!”

“We’re going to make them in these.” Stella pointed to a stack of old plastic ice-cream tubs on the bench beside her. “That way each horse gets their own cake.”

“And we’ll use slices of carrots and apples to decorate the tops,” added Kate. Mrs Brown shook her head in disbelief. “Do you think your ponies actually know that it’s Christmas tomorrow?”

“Toby knows,” Kate grinned. “He’s got a list of things he wants from Santa.”

“What’s on the list?” asked Stella. “A new summer rug, some floating boots, one of those cool pink riding crops…”

“Yeah, good point,” mused Kate. “I didn’t think of that when I was writing the list!”

“I’ve asked for a new bridle,” Stella said, “and some proper long black leather boots. But the ones I want are really expensive. Mum said if I’m lucky, Santa will get me some black rubber ones at least.”

“What about you, Issie?” Kate said. “What?” “What do you want for Christmas?” “I really want some new jods,” Issie said. “Mine are all too small.”

“All your clothes are too small,” said Mrs Brown. “When you turned fourteen you shot up like a beanpole.” She smiled at her daughter. “I think Santa can probably stretch to a pair of jodhpurs. In fact, there’s a suspiciously jodhpur-shaped present under the tree with your name on it.”

Even though it was just Issie and her mum at home for Christmas, there were loads of gifts under the tree. Issie’s Aunty Hess had sent her a present, wrapped in the most wonderful pink and gold horsey paper. (Issie was pretty sure it was a new halter for Storm.) There were a couple of gifts under there from her dad too – mailed at the last minute as usual. Issie had given one of the boxes a shake and it sounded like a board game of some sort. He usually sent her a board game. The other gift was about the right size and shape to be a Barbie doll. Issie had learnt by now not to be disappointed by her dad’s presents. Last year he gave her a book all about fairies with glitter on the cover, that was totally babyish. It was like he didn’t realise that she was fourteen now, and still treated her like a kid. In his mind, Issie was still the same nine-year-old she had been when he had left. She hardly ever saw her father. He had remarried and had a new family – Issie had a half-sister and a half-brother – so he never came home to see her at Christmas time.

Issie missed her dad at Christmas. Even if his presents did, well, kind of suck. It seemed strange without him here, with just Issie and her mum.

“Is one of those presents under there for me?” Stella asked hopefully, eyeing up the tree. Issie pointed at a small package wrapped in pink and red candystripe paper. “That little pink one at the front is for you from me, and the purple one is for Kate.”

“Ohhh… let’s see!” Stella rushed over to the tree and prodded her package. She let out a shriek. “Is it a dandy brush?”

Issie looked crestfallen. “Stella, you’re not meant to guess! It’s supposed to be a surprise.” She watched Kate holding up her present, which was really badly wrapped and quite obviously shaped like a sweat scraper, the curved rubber sort you use to dry off a wet pony.

“I think I can guess what mine is too,” Kate grinned. Mrs Brown shook her head at them. “I can’t imagine what we used to buy you lot for Christmas before you had ponies. Your Christmas lists read like a tack-shop inventory.”

“I can,” Stella said. “I mean, I can remember what it was like before we had the ponies.” She looked at Issie. “Do you remember that Christmas when we went on the pony-club camp? You know, the Christmas you got Mystic?”

Issie felt a shiver run through her as Stella said Mystic’s name. Of course she remembered that Christmas. She remembered that it was their first ever Christmas without her dad, which had been awful. But in a way, it also turned out to be the best Christmas she had ever had. It had been the start of everything.

When Issie looked back on that time now, she realised that Mystic was meant to be hers – that their lives were inextricably intertwined somehow. Of course, back then she couldn’t possibly have known what was to come. That Mystic would be taken away from her so tragically. And how could she possibly have known that his death was not the end at all, but the beginning? Issie’s bond with the little grey pony was so deep and so powerful that her horse would never really be gone. Whenever she needed him most he was there to watch over her and her horses and keep them safe. Not like a ghost or anything, but as a real horse, flesh and blood. Right by her side for the rest of her life.

At Christmas time, more than at any other time, Issie found herself recalling memories of the times before Mystic died, when he was still with her as a regular pony. But most of all she remembered the Christmas when she and Mystic first met. Had she found Mystic or had he found her? It didn’t really matter. What mattered most was that, with each day, she realised more and more just how magical that Christmas had been.

“I remember,” Issie said to Stella. “I remember…”