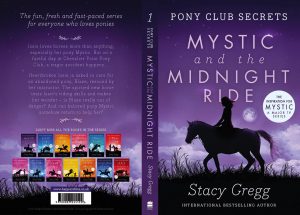 Please, please let it be sunny tomorrow, Issie had prayed as she went to bed the night before the gymkhana. But when her alarm clock woke her at quarter to six the next morning and she ran to the window there were grey clouds covering the sky. Still, there was no sign of rain and when she listened for a cancellation on the radio nothing was mentioned, so she headed out into the pre-dawn light to prepare Mystic for his big day.

Down at the River Paddock, Stella and Kate were already there. Stella was busily brushing out Coco’s tail, while Kate was sectioning out Toby’s neatly pulled mane so that she could start plaiting it into tiny knots along the top of his neck.

“You’d better hurry.” Stella smiled. “Tom said he’d be here by seven to help us load them into the truck and take them to the show grounds.”

Grabbing Mystic’s halter out of the tack room, Issie set off across the paddock. The grass was wet with dew and her riding boots were soaked by the time she reached the spot where Mystic was grazing. The pretty dapple grey was chewing up great chunks of fresh spring growth and barely bothered to raise his head to acknowledge her.

“Here, Mystic,” Issie called hopefully, hiding the halter behind her back with one hand and holding her other hand out towards the pony.

She had forgotten to bring a treat to tempt him with, but perhaps she could bluff the gelding into believing she had a piece of carrot or apple in her empty fist.

No such luck. Mystic had spotted the halter. He gave a deep snort of surprise, shaking his mane and trotting off to the other side of the paddock.

“Oh, Mystic, no! Not today!” Issie cried in despair.

Of course these things always happened at the worst possible moment. Like today. Issie was nervous enough about riding at her first gymkhana. Now she was running late – the others were nearly ready to plait up their horses and she hadn’t even started grooming. Even at this distance Issie could see that Mystic had got himself into a right state from rolling in the long paddock grass. There were chunks of dirt matted into his silvery mane and his hocks were stained bright green.

“Come on, Mystic,” Issie begged. She bent down, picked a handful of grass and offered it hopefully to the little grey pony. Mystic swivelled his ears towards Issie. He took one step forward, then another. Even though he was knee-deep in grass, the small bunch in Issie’s hand was too good to resist. Issie walked quietly up to his side and slid the halter rope around his neck. Then she eased the halter over Mystic’s nose and quickly buckled it up behind his ears. Success!

“Who’s a naughty pony then?” Stella giggled as Issie led Mystic up to the fence and tethered him next to her Coco.

“Do you hear that, Mystic? I bet you wish you were a colt again, eh boy?” Issie laughed.

Mystic wasn’t a young horse. Issie had known that when she bought him. Back then she been told that the grey gelding was eighteen. But it was hard to tell the age of a horse. Her pony-club instructor Tom Avery reckoned that the little grey might actually be as old as twenty-five which was positively ancient in horse years.

The pony’s dapples had faded over the years from the dark steel of a young colt to a soft dove grey. Mystic’s back was slightly swayed too, from years of riding. Still, he was a beautiful pony, only fourteen hands high but he held himself so proudly he seemed bigger. His eyes were dark smudges of coal in his pale face, and they had the calm depth of a horse that has lived a little. Mystic certainly knew his way around a showjumping or cross-country course.

Issie sighed as she examined her horse’s hindquarters. “Oh, Mystic, why aren’t you a nice dark colour like Toby and Coco? Keeping you clean is twice as much work.”

“Don’t be so sure,” Stella said. “You can’t see the grass stains on Coco, but check this out.” She gave the chubby little brown mare a friendly slap on the rump and a circle of white dust appeared where her hand had been. “See? I’ve been grooming for hours now and I can’t get rid of it.”

Coco turned around to see what Stella was up to and gave her a sniff, nuzzling the girl with her velvet-soft nose. “No, Coco. I don’t have any carrots,” Stella giggled, “but if you win a ribbon today I promise you can have as many carrots as you want.” Coco nickered happily. It was a deal.

Stella and Kate were perfectly suited to their horses, Issie thought. Blonde and blue-eyed Kate was as lanky and long-limbed as her rangy bay Thoroughbred, while Stella, with her bunches of red curls and pale complexion dotted with freckles, was small and bubbly – the same personality as her chocolate-coloured mare.

Stella was Issie’s best friend. They had been best friends since the first day of primary school when they realised that not only did they both love horses, they also loved to draw. Even now, art classes were still a competition between the two of them – although their third form art teacher was less than impressed that all they ever wanted to draw was horses.

Issie grabbed a rubber band out of her grooming bucket, using it as a hair tie to secure her long, dark hair out of her face while she worked. Then she dipped her hand back into the bucket of brushes again, this time producing a stiff-bristled dandy brush, and got started on Mystic’s hocks, furiously scrubbing away at the mud. She gave Mystic’s two white hind socks a brisk scrub with a damp brush to remove the last of the marks, then set about bandaging his legs for the trip. It may only be a few minutes down the road, she figured, but Mystic might still injure his legs in the horse truck if they weren’t padded for protection.

The Chevalier Point Pony Club grounds were within riding distance of the River Paddock – about half an hour away at a steady trot. But the stretch of road that you had to ride to reach the pony club was treacherous. The club grounds were just off a busy main road, which made them a nightmare to reach on horseback. Most drivers had no idea of the danger they were causing as they raced past at top speed, never bothering to slow down in case they spooked the horses that were confined to the narrow grass verge on the side of the road.

On rally days, Issie usually rode to pony club the long way, using a series of quiet backroads to reach the grounds, avoiding the main road as much as possible. But today, she wouldn’t have to worry about the roads at all. Tom Avery was loading their ponies into his horse truck to drive them to the gymkhana so that they would arrive fresh and ready for the big event.

Issie had bandaged Mystic’s tail to keep it clean and was about to start with some last-minute mane-pulling when she heard the stern voice of her pony-club instructor booming out across the paddock. “Come on, girls, I thought you’d have them rugged up and ready to go by now.”

Issie turned around to see Avery striding towards her, a tall striking figure in crisp white jodhpurs and long black boots. His face was set in a serious expression underneath the mop of thick, curly brown hair. He held a riding crop in one hand, which Issie had never seen him use – except to thwack against the side of his boot when he was making a point. She guessed he carried it mostly to make himself look meaner.

Sometimes Stella would imitate Avery when he wasn’t around, whacking her crop against her leg and barking in a commanding tone, “Come on, chaps, get their hocks under them!” Issie and Kate would hoot with laughter at this impersonation, but the fact was that all three girls had enormous respect for their instructor.

Avery had once been a professional eventer – until he took a bad fall at the Badminton Horse Trials which finished his career for good. He didn’t talk much about those day, but Issie knew he had competed against the best riders in the world. He had even been on the same team as Blyth Tait and Mark Todd. But since his accident he didn’t ride at all.

Now he worked for the International League for the Protection of Horses, rescuing horses and ponies that had been mistreated and abused by vicious owners, and in his spare time he gave lessons to Issie and the other riders at Chevalier Point.

Hardly a glamorous life for him, Issie thought. After all, Chevalier Point wasn’t exactly the most exciting place on earth. It was a small town, perched on a peninsula of land. Issie’s mum was fond of saying that there were more horses there than people. Which may have been true. Certainly, if you loved horses then Chevalier Point was the best place in the world to live. With its flat green fields and rolling hills it was perfect horse country.

“Let’s get them loaded,” Avery instructed the girls. “We’ve got no time to waste.”

“Toby looks great in his new rug,” Issie said as Kate led him towards the ramp of the truck. The handsome bay wore a blood-red woollen blanket. Coco, too, was dressed up in her show rug made of navy-blue netting.

Wearing his plain old canvas paddock rug, Mystic didn’t look anywhere near as grand. “Don’t worry, boy, you look good just as you are,” Issie reassured him, worried that her pony’s feelings would be hurt if the others got all the attention. Mystic seemed happy enough with Issie’s praise. There was a definite spring in his step as he walked up the truck ramp, as if he knew he was on his way somewhere exciting.

Toby whinnied a greeting to Mystic as Issie tied the little grey up in the stall next to the big bay Thoroughbred. She gave each horse a hay net to play with for the five-minute trip and knocked on the window that separated the horses from the passenger cab of the truck to let Avery know they were ready to go. The overcast skies had cleared, the sun was out and they were on their way.