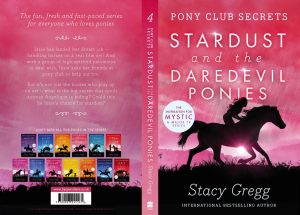 Issie hadn’t heard from her aunt in months since her last visit to Blackthorn Farm so when she got the phone call it came as a bit of surprise.

“Isadora! My favourite niece!” Hester had trilled down the phone. Her greeting made Issie laugh straight away – Hester always called Issie her ‘favourite niece’, when in fact she was her only niece so she didn’t have much competition!

“Hi Aunty Hess. How are things at the farm?”
Blackthorn Farm was a grand old country manor with hundreds of hectares of land, high in the hills outside Gisborne on the East Coast. It was there that Aunt Hester trained her mad menagerie of movie animals, including a team of stunt horses.

“Busy, busy, busy!” Hester told her. “We’ve got a big movie coming up – The Palomino Princess – have you heard of it?”

“Ohmygod!” Issie squealed. “Aunty Hess! I love that book! Are they making a film of it? How cool! And your horses are going to be in it?”

“Absolutely.” Hester said. “Well, at least a few of them are – Paris and Nicole and Destiny and Diablo to be exact. They need quite a few stunt horses for the film, but as you’ll know if you’ve already read the books, the Horses of Darkness all need to be pitch-black – plus we need five palominos for Galatea and her princesses. Paris and Nicole are perfect for princess horses – and Diablo is having his piebald patches dyed so that he can play one of the black horses.”

“I’m glad you think so dear,” Hester said. “because I was hoping you might want to come and work with me on the movie.”

“Well yes. And your friends too. They’re looking for riders and wranglers right now and you’ve got some school holidays coming up. I thought the timing was perfect.” Hester said.

“I couldn’t…” Issie began to protest but Hester interrupted.

“I know Blaze is expecting her foal and you won’t want to leave her alone,” Hester said. “but the movie set isn’t far away from Chevalier Point. You could still go home on weekends to check on her. How long is it now until she is due?”

“The vet says she has maybe a month to go,” Issie said.

“Well that’s perfect then! Filming will be wrapped by the time the foal arrives. And you’ve got nothing better to do in your holidays since you can’t ride her now. She’ll be so fat you won’t be able to fit a girth around that tummy of hers!” Hester said.

“Listen, my favourite niece, I could really do with your help. There are nearly two dozen horses in this film and Aidan and I are responsible for all of them. Which is fine except it’s tricky to find riders who are the right size to play the palomino princesses. We need four girls who fit the costumes to double for the stars of the film, and they must be good riders. There’s no problem finding stunt doubles for the black horsemen – we’ve got seven stunt riders who are all over six feet tall. But it’s been a nightmare finding our four girls. They can’t be too grown-up, Princess Galatea and her riders are all, well, actually they’re about your size.” Hester paused. “We’ll pay you all of course – film rates for stunt rider are really good.”

“It all sounds great Aunty Hess!” Issie said. “And I’m sure Stella and Kate will be keen and we can find a fourth girl to ride with us…”

“Excellent!” Hester said. “So, what’s the best way to organise this? Do you want to put your mother on the phone? I think she’s more likely to say yes if I ask her don’t you?”

“Actually Aunty Hess, I wouldn’t bet on it. She’s still mad at you after you last time.” Issie said.

“Oh. I was hoping she would have forgotten about that by now.” Hester said.

The last time Issie had stayed with her Aunt she had caught and ridden Destiny, a wild stallion that led a herd of wild ponies at Blackthorn Farm. Issie had returned home from her adventures with her arm in sling – a fact that her mother was none too happy about.

“Your mum is such a fuss pot.” Hester sighed. “It was only a little sprain. Put her on the phone. I’m sure she’ll say yes once I talk her around.”

“Mummm!” Issie called with her hand over the receiver. “It’s for you!”

As Mrs Brown took the phone out of her daughter’s hands with a quizzical look, Issie held her breath and hoped Aunt Hester would be able to make her mother say yes.

Issie’s mum and Aunt Hester were sisters – but the two women were the complete opposite of each other in every way. Hester was, as she put it, a “bit too bohemian for her own good”. She had been an actress before she gave up the movies herself and started training animals to act instead. She had curly blonde hair that tumbled over her shoulders and always wore lots of jewellery and scarves, even when she was riding. Hester had been married three times “all of them wonderful weddings!” as she told Issie, but she had no children of her own.

Issie’s mum had only been married the once – to Issie’s dad – although they split up years ago and Issie hardly ever saw him. And Mrs Brown looked nothing like Hester – she looked just like Issie, with long, straight dark hair and tanned olive skin.

The most important difference between the two sisters though, as far as Issie was concerned, was horses.

Aunt Hester was horsey through and through. Right now she had twelve horses in her stables at Blackthorn Farm. Issie’s mum, on the other hand, didn’t like horses one bit.

Issie had needed to beg and plead for years before her mum finally caved in and bought Mystic for her.

Issie could hear her mum on the phone now with Aunty Hess and it sounded like Hester was getting a telling-off. She could only catch snippets of the conversation but it clearly wasn’t going well.

“…Hester! You must be joking!” she heard her mum say, “…Safe? What do you mean safe? Last time she came home with her arm in a sling…no, it’s far too dangerous…”

Issie slunk away to the kitchen and waited for her mum to finish yelling at Hester and get off the phone. Finally, she heard the receiver being hung up and Mrs Brown appeared in the kitchen doorway, her arms crossed in front of her, and her brow furrowed in a deep frown.

“I have a feeling that you already know what that phone call was about.” she said.

“So you really want to help Hess with this movie?” Mrs Brown said.

Mrs Brown sighed. “I’ve told Hester that if I see so much as a sticky plaster on you when you come home this time I will hold her responsible. She insists that it’s perfectly safe. There’s a bit of riding apparently, but you’ll mostly just be grooming the horses and mucking out the stalls.”

“Wait a minute!” Issie said, “does that mean you’re going to let me go?”

Mrs Brown nodded, “Your Aunty Hess is very convincing. You start work as a stunt rider on The Palomino Princess next Monday.”