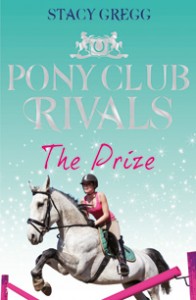 Georgie Parker stood up her stirrups and looked directly between the pair of ears in front of her, fixing her gaze on the hedge. It was hardly a big fence, not by Blainford Academy standards, and Georgie didn’t even bother to slow Belladonna down as she came at it. She let the mare gallop, only taking a last-minute check on the reins when she was close enough to see a stride and then sitting deep in the saddle and driving the mare on with her legs. The mare’s dark bay ears pricked forward at the hedge and then Georgie felt the horse lift up beneath her. There was that brilliant moment of suspension when they were sailing in mid-air, and then they were landing again on the other side and galloping for home.
The grounds of the school were in sight and ahead of them was the start of the bridle path that led to the school grounds. This was the route the students usually took to the stables, but instead Georgie veered sharply to the right, urging Belle to stay in a gallop as she rode the mare in a straight line towards the stable block over the open grazing fields of the Academy.
“It’s OK,” she told the mare as she leaned down low over her neck, “we’re going off-road. This is a shortcut.”
Belle’s gallop stretched out, her strides devouring the green pasture. Georgie perched up in her stirrups, her weight in her heels to keep balance, her eyes still trained directly between the mare’s ears. Ahead of her she could see the fence that ran around the perimeter of the stables. Like most of the fences in Lexington Kentucky it was an elegant post and plank fence, with a five-bar wooden gate at the entrance near the stables. It would be easy enough for Georgie to pull Belle up and get off and open the gate – but where was the fun in that?
As they neared the gate, Belle snorted and hung back. She knew the difference between a jump and a school gate and she wasn’t sure about hurdling the obstacle in front of her. But Georgie put her legs on firmly and urged the mare with her voice and Belle surged forward, putting in one-two-three neat strides before soaring the five bar gate as if it were no more than a cavaletti.
They arced over the gate, landing neatly on the grass on the other side, and by the time they had reached the verge of the concrete forecourt Georgie had pulled the mare up to a walk and was dismounting.
“Good girl!” Georgie gave the mare a slappy pat on the neck. She had run her stirrups up and was leading the mare towards the stalls when she caught sight of the boy in prefect uniform rounding the corner of the stable block.
“Uh-oh,” Georgie groaned as she recognised the arrogant lope and russet hair of Burghley’s head prefect, Conrad Miller.
Georgie could tell by the smirk on Conrad’s face that he’d seen her take the shortcut over the gate. “Hey, Parker!” His voice had the officious tone of a parking warden. “Students aren’t allowed to jump school fences; it’s against Blainford rules.”
Georgie felt a sudden sting of anger. Ever since she’d arrived at the Academy Conrad had taken a perverse joy in picking on her. Last term things had come to a head when Georgie’s boyfriend Riley had held a mallet to Conrad’s throat at the school polo tournament, publicly telling him to back off and leave Georgie alone.
For the rest of the term Conrad had heeded Riley’s warning, but clearly he had now decided that the truce was about to come to an end.
“You’ve got fatigues, Parker!” Conrad said.
Georgie gave the prefect a withering look. “You’re a real numnah, Conrad.”
“Watch your attitude, Parker – or you’ll be on double fatigues.” Conrad shot back.
Georgie groaned. There was no point in arguing with Conrad. Besides, it would take more than fatigues to dent her spirits. Tomorrow was the first day of the new term at Blainford and Georgie was back with a vengeance. Last term she had been dropped from Tara Kelly’s cross-country class and had to play polo instead. But now her dreams of eventing glory were back on track – she had regained her coveted place in the class for the last term of the year. And while she still had numnahs like Conrad to deal with – and even worse, his spoilt princess of a girlfriend, Kennedy Kirkwood, trying to take her down – she didn’t care.
The past few months riding polo ponies had made her fearless. Her riding had improved and her bond with Belle was stronger than ever. She trusted the mare completely – and more importantly, Belle trusted Georgie. They would be unstoppable on the cross country course. Which was just as well because apparently this term Tara Kelly had a real test in store for them.
Georgie had heard the murmurings around the school ever since she had returned from her holidays. The final term exam would wind up eliminating more than one member of the cross-country class. By the time the year was over, only a handful of the Academy’s elite young riders from around the world would remain – and Georgie was determined that she would be one of them.