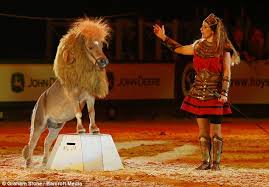 I have been having the best time EVER at HOYS! So great to meet so many of you at last and sign all your books! It was a huge day yesterday but I still had time to go to the shows. I loved the pony showjumping – what a bunch of speed demons! And the pony club games teams were amazing! Special shout-out to the riders from Cheshire Hunt who came and got their books signed afterwards.

The funniest show of the day was Luma the Lion. I must admit I am a bit of a clot and expected a real lion to come out. In fact I was quite worried about the idea of having a lion in the arena with so many horses around. Well I needn’t have fretted because Luma was not actually a lion – he was a miniature pony in a lion’s mane wig!! His performance was so hilarious I was weeping with laughter!!

I hope to see lots of you back at HOYS again today – I will be at the Equestrian Bookfair stall signing copies of The Princess and the Foal plus all my other books all day long! See you there!!